We have decided to postpone the Old North End Repair Café due to public health concerns around gatherings. We are still planning on hosting the Repair Café on April 18th, 2020. We will provide further updates on our Facebook page and here at laboratoryb.org.

We’d like to thank everyone in the community for their interest, as well as everyone who signed up to volunteer. We are greatly looking forward to our debut, so stay tuned!

Feel free to message us on Facebook or send an email to [email protected] with any questions.

The end is within sight for CoreOS Container Linux: May 26, 2020. For a few years now we’ve made use of Container Linux for hosting the laboratoryb.org website. Sadly, this is where our CoreOS journey ends, with end-of-life coming right around the corner.

We’ve finally jumped the CoreOS ship over to Flatcar Container Linux by Kinvolk, an OSS fork of the original project. Everything has been faithfully copied over and is once again running smoothly.

Thanks to Kinvolk for keeping the Container Linux legacy alive!

It’s been quite a move for Laboratory B! Our new location at 12-22 North has come with plenty of perks, but at the same time, it’s placed new constraints on things like space, parking and electricity use. As Matt Cropp mentioned in the previous post, the new space has a cap on free electricity use – so as part of the move, we’ve had to temporarily suspend our on-site server hosting policy.

Unfortunately, that conflicts with one of the priorities we formulated during the move – that we should consider migrating away from the locked-down services (offered by Google, Amazon and their ilk), and instead look towards self-hosted, open-source infrastructure to run our day-to-day Lab activities. (After all, free and open-source software is practically in our mission statement.)

So, how could we reduce our power footprint but still run servers? One suggestion was to use virtual private servers (VPS) – but the monthly cost of hosting was potentially prohibitive, and relying on webhosting would bring us further from truly controlling our own infrastructure. The nail in the coffin, though, was probably that we still had a surplus in our budget of renewable electricity – and some napkin math showed it might be enough to run servers with, if only we use the right kind of hardware. Napkin math devolved into discussion about Intel “Avoton” Atom processors and triple-digit-core ARM boards – but discussion matured into dejection when the price tags came up. The Lab did not have loose cash.

Around the same time, I had set up a Dockerized GitLab server on an old Mac Pro at home, to help organize our projects and handle support tickets from AJ, our landlord at 12-22 North. (Context: As a component of our lease, we are granted a rent discount in exchange for rendering IT support, in a sort of skill-share scheme.) I soon discovered, however, that the Mac Pro doubled as a space heater, drawing over 200W at near idle. I needed a solution that wouldn’t cook me alive when the summer came around – and one night, as I aimlessly browsed Youtube, the solution presented itself.

Laptop are plentiful, use cheap RAM, idle at low wattage, have an integrated UPS (the battery, duh!) and KVM – all things a server could use! Plus, if you don’t mind going without one or two of those things, you can find some absurdly cheap hardware – and find I did, in two dirt-cheap X230 motherboards. Long story short, for $100 a pop, I was able to cobble together two machines (i5-3320M + 16GiB DDR3), each of which could rival the Mac Pro, but which consumed a whopping nine watts at near-idle – 5% of what the Mac Pro was drawing.

As hacky as it is, having a server solution that can be hosted at the Lab means we can house new open-source platforms – Etherpad / Etherdraw, Mattermost, Funkwhale, Mastodon, Matrix … for just now, the GitLab is the lone tenant, but our only limit is how many laptop skeletons we can fit in our server closet. 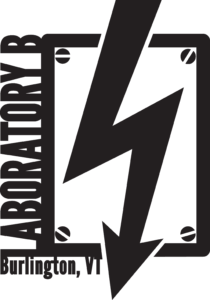 As we settle into our new space on North Street, one project Lab B members have been working on is an updated membership agreement and code of conduct. Members are the core of Lab B: they govern our organization democratically, expenses are funded primarily by their dues, and, as an all-volunteer non-profit, their work is what makes things happen.

Thus, to clearly communicate what is expected of Laboratory B members, the following was passed by a vote of the membership this month:

The Lab maintains our autonomy and flexibility through the core of our funding coming from member dues. Therefore I will…

The Lab is an all-volunteer organization that requires active member participation to function. Therefore I will…

To maintain a healthy community, Lab members take accountability for their behavior towards both their fellow members and the community at large. Therefore I will… 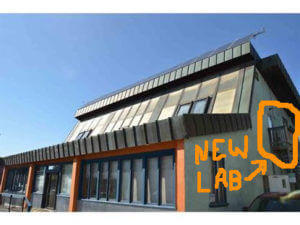 After a heroic move-out effort by Lab members and volunteers, and a month of being a “virtual Lab” operating out of a storage locker, Loomio group, and pop-up event spaces (thanks, Bytes.co!) we’re pleased to announce that Laboratory B once again has a space!

After considering several possibilities, our membership voted to move into a room on the second floor of 12-22 North Street in the Old North End. In addition to our new HQ space, where we’ll be holding public hours, meetings, co-working sessions and small workshops, the lease also gives us access to a number of shared spaces we can use after business hours, including a dedicated electronics lab, a sizeable class/event space on the first floor, and basement storage.

Many things about the Lab will stay the same, but a sampling some of the changes the move offers that our members are excited about include:

We’ll be spending the next few weeks moving in and setting up, and are planning to host a “Lab Warming Party” for our initial Thursday public hours on February 21 from 7-9pm. For more details, check the Facebook event, and, as always, keep an eye on our calendar for upcoming Lab B happenings!

After several years in residence on the top floor of the Soda Plant on Pine Street, Laboratory B has officially left the building as of 1/1/2019. Many thanks to the members who put in lots of hours, leg, and back-work over the past month to prep to space for our move, and also great appreciation to the friends of the Lab who showed up on the 30th to help with the big move day!

The move has been a great opportunity to assess and discard a good deal of superfluous stuff, while our core materials are safely ensconced in a Champlain Housing Trust storage locker, ready to be deployed at our next space….

We’re already in talks with a few possible new sites for the Lab, but are being deliberate about the process so we can land on the best spot for our community’s needs. We’re in search of a space with a maximum all-inclusive cost of $700/month; it can have shared spaces, be a sublet arrangement, etc., but needs at least one room that Lab members will have exclusive access to. So, if you have a lead for the next venue for Burlington’s member-run and -governed hackerspace, please get in touch by shooting an email to [email protected]!

In the meantime, Lab-sponsored events will be popping up in various locations around town, and we’ll be using the spare capacity derived from not having weekly public hours to do some internal work to position us for success in our 5th (!) location since the Lab was founded in 2009. If you want to keep in the loop, follow our shared calendar and Facebook page, where events and announcements will be posted, and we’ll post to this blog when your new space is finalized.

Happy New Year, and we look forward to sharing the next iteration of Laboratory B with the Burlington community in the coming months!

Ever wondered exactly what those black helicopters are up to? Thanks to a federal law called the Freedom of Information Act (FOIA), you can find out!

At the FOIA party, we’ll get together, brainstorm ideas, teach the basics, and discuss techniques for getting the information you’re after. Bring your most burning government questions (local, state, or federal), and we’ll make sure everyone leaves with at least one request under their belt.

The “Intro to FOIA” presentation by Brian Waters will start at 7:15 and run approximately 30 minutes, including Q&A.

Following the presentation, there will be a workshop session in which attendees will file their first FOIA requests, so, if you are interested in doing so, bring along a laptop! 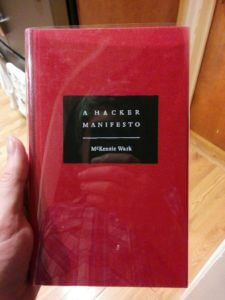 e’re excited to add a new event to the Lab’s roster: the BTV Hacker Book Club! The group will be meeting monthly to discuss a book drawn from a list built by Lab members, with members voting on which book from the list to read each month. While Lab members pick the books, all who have read the book are welcome to the discussions, and attendees are welcome to bring munchies and beverages to share.

Our first pick is A Hacker Manifesto by media theorist McKenzie Wark, and we’ll be gathering for the discussion on Thursday, 8/17 at 6pm in the Couch Room. For more details and updates, RSVP to the Facebook event.

We’ll be discussing setting a recurring monthly date at the August meeting, and Lab members are presently voting on the September book pick. Cyberpunk classic Neuromancer by William Gibson currently holds a narrow lead, but there are a few more days for members to weigh in…

I’ll be teaching a class on how to setup a Pirate Box at the Generator on March 22nd. Check out more info and sign up here.

Want to carry around a world of important data, like Wikipedia, and health guides? 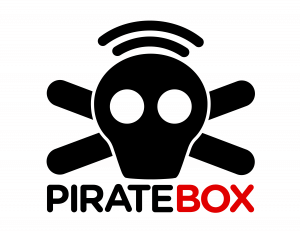 Need a way to share a bunch of files with some folks?
Come learn how to make a PirateBox a tool for sharing information in a secure offline manner!

PirateBox is a DIY anonymous offline file-sharing and communications system built with free software and inexpensive off-the-shelf hardware. Perfect for public spaces as a means of sharing interesting data and having offline discussions. 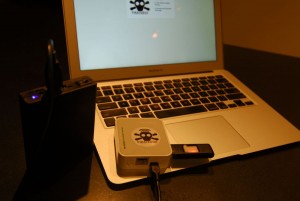 During this quick 4 hour  class students will learn how to build a Pirate Box. This class will guide students through the process of converting a plain TP-Link MR3020 and USB thumb drive into a Pirate Box.
$50 lab fee covers purchase of Pirate Box and all necessary materials (MR3020 & USB Drive). 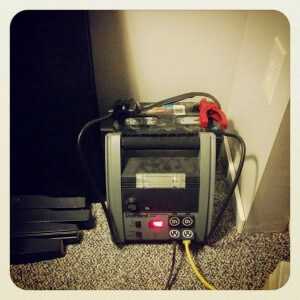 A few Lab members recently asked me “how do you survive power outages?”

Here’s how, and it’s all available at your website or department store of choice (cough cough Amazon, Wal-Mart)

One (1) marine deep cycle battery, as large as you can afford
and/or can carry (approx $80) (must buy in store)

Optional: One or more 12V accessory plugs, to wire into b 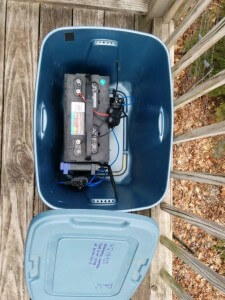 My current “Power Box”, pictured below, is currently out on an off-grid island staged and waiting to run some Civic Wireless customer premises equipment. The box will run network gear on a small inverter for weeks on a full charge.