Thanks to everyone who came out to the dance party on Friday night and helped raise a bit of $$ for the Repair Cafe! It was a blast, and we’ll likely do another one at some point.

If you want to swing by while we’re fixing things rather than flailing about wildly with glow-sticks, swing by the next Repair Cafe on Saturday, Nov 20!

With some inspiration from the potential snow storm last week, I endeavored to test my emergency preparedness for heating my apartment when the power is out.  I never did lose power, but the test was successful and I am happy to know that if I did lose power in the winter, I can keep warm at home.

I attached an inverter to a marine battery, then plugged in my Rinnai heater and it ran just fine.  The Rinnai does buzz a bit loudly, but that’s because the inverter does not produce a “true-sine-wave” signal.  I tested the setup with a box-fan attached to the inverter as well and it worked fine.

With the fan and the heater both running on LOW the draw was 115W. Some quick and super dirty math approximations tell me that the battery (if fully charged) will run this about 11 hours. This would be longer if the box-fan isn’t running (less power would be used).

Of course, the inverter can be run from any 12V source.  My Honda Civic has an alternator with a faceplate rating of 70Amps.  Some quick math tells me how much power this can potentially provide.

I believe the inverter is well within the ability for the alternator to run.  So the car could potentially run the inverter as a generator as long as there is gasoline in the tank.

Check out the rest of the info and pictures at my blog.

Laboratory B is all set up and ready to see you at Champlain Mini Maker Faire this weekend!  The event is on Sat. October 4th 10am – 5pm,  and Sun. October 5th 11am-4pm at Shelburne Farms in Shelburne Vermont.

Lab B has been at the Maker Faire since it started 3 years ago, and like last year and the year before, we’ll be teaching kids & adults how to solder! FairPoint Communications made a donation to help provide kits, and we have four kits from SparkFun in the mix this year; Weevil Eye, Big Time Watch, Simon Says & Mr. Roboto.

From our excerpt in the schedule:

“Join the folks at Laboratory B for a self-paced soldering workshop. We bring the soldering irons and the kits, you bring the desire to learn.  We will have kits from SparkFun and all the required supplies and safety gear for you to sit down and learn how to solder, and when you finish you take the kit home!  Have you soldered in the past but are not familiar with some of the newer techniques such as surface-mount soldering?  No problem!  There will be beginner kits, intermediate kits, and advanced level kits to fit all skill levels.” 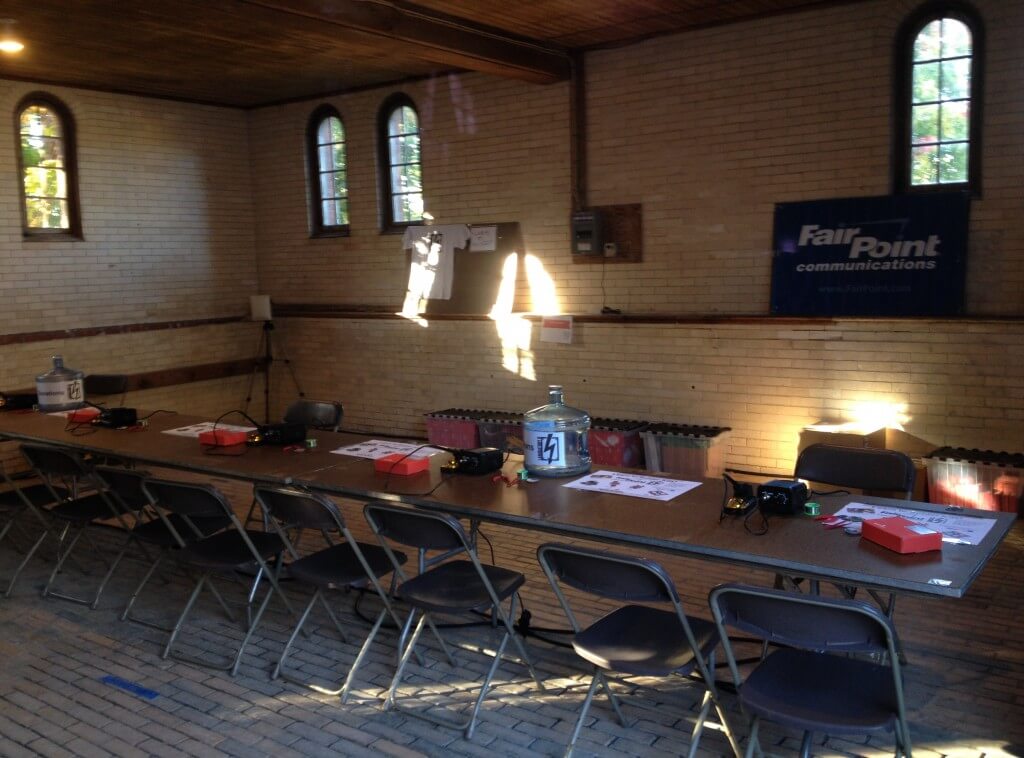 The Laboratory B crew had a great time at Champlain Valley Maker Faire. It was a gleeful marathon of teaching kids & adults to solder using the Sparkfun kits. Labortory B would like to thank in short order. To all the folks that stopped by the soldering station and wanted to come by the Lab; Open hours are 5:00 pm to 8 pm Tuesday and Thursday. Email [email protected] or call us at 802.540.2524. We would love to meet with you where it is warm & dry.

Finally: It’s the first of the month, so that means it’s 2600 time on Friday! Meeting will be at the usual place the Game Lounge at 178 Main Street in Burlington Vermont from 5-8. It’s on the third floor, so just keep going up. There will be signs to point the way. Laboratory B will have a booth at the Champlain Valley Maker Faire, the Faire is Saturday  September 29th from 10-7 at the Coach Barn at Shelburne Farms. At the booth we’ll teach young and old how to solder! We’ll have some awesome kits from SparkFun. You should buy tickets now to make sure you can get into the Faire.

Do you think having a Maker Faire in Vermont is cool! If so print out some posters and join the street team! Let people know!

Pretty sure the title and image says it all. This guy is hardcore! While not directly related to Security concerns this is still pretty cool! The NanoSail-D spaceship has unfurled a large space age sail while in orbit above the earth.

I for one welcome our new space voyaging overlords.