Since my previous post I have added a couple additional temperature sensors to my piHouse project.  One is an outdoor temperature sensor that I previously programmed but never installed outside, and the other is a new sensor in my bedroom.  This involved some hardware planning and effort installing because I had to run a cable through the house and outside, but once I tested the new cable run, it was relatively simple to duplicate the software for the sensors I already had.

The part of this that took the most time was pulling the cable and then soldering the connections.  The biggest problem I have is placement of the outdoor sensor.  I am having issues with direct Sunlight.

Here are some highlights, you can find the whole story here.  This time I also include some examples of the commands I use on the raspberry pi to obtain the data.

When testing my hardware connections, I use this command to ask the pi to take a reading and then display the result to the command line: 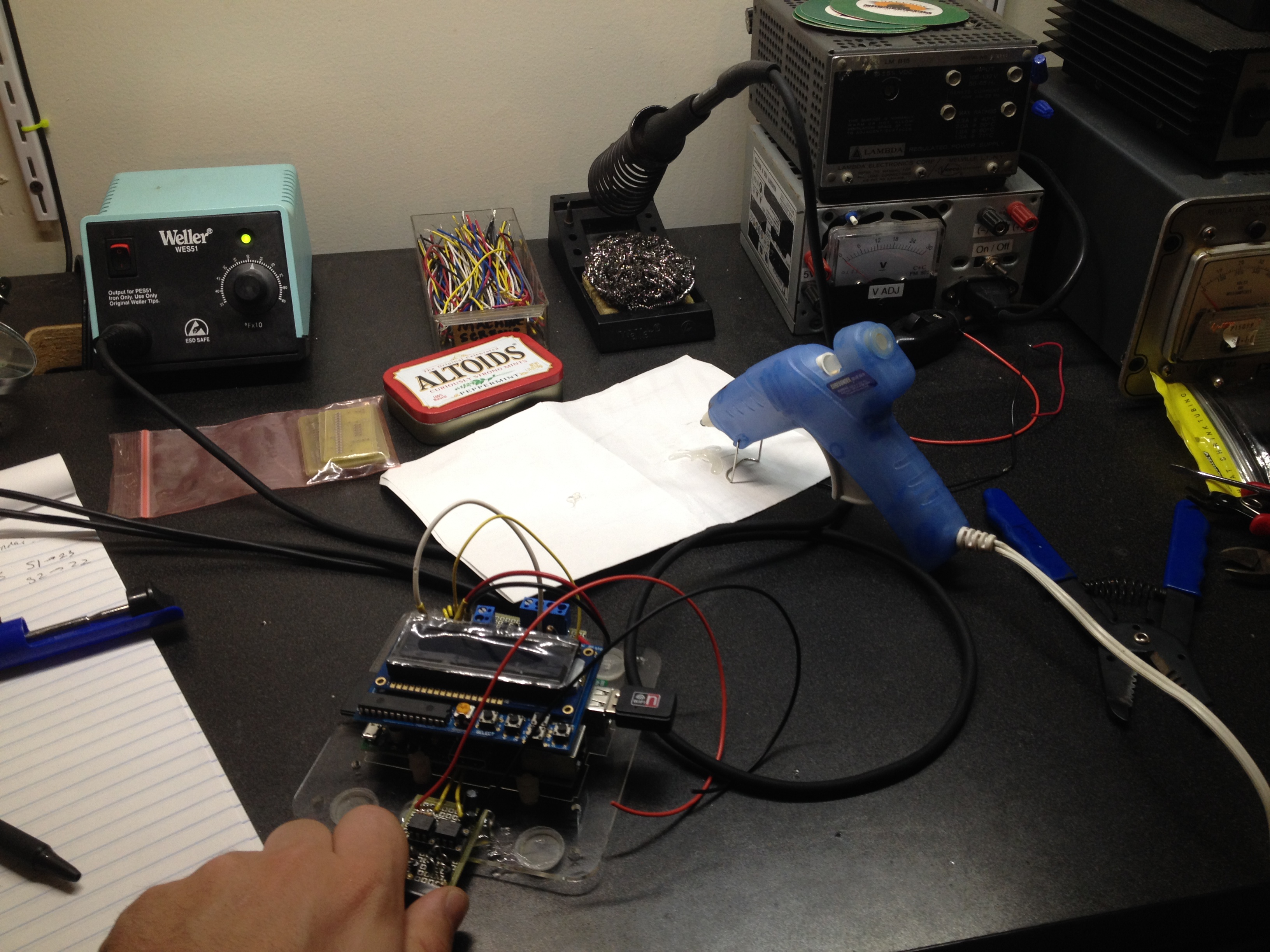 In March I posted about using my Raspberry Pi to monitor my furnace and the temperature of my apartment.  I moved over the summer and the new apartment does not have the same type of heating that the last apartment did. So I had to make some changes.

The Pi now interfaces with a Rinnai heater, which was slightly more complicated than the furnace thermostat.

Here are some highlights, you can find the whole story here.

I’ve been working on a Raspberry Pi project and got it running this weekend.  This post is about the hardware and the installation.  I will post later about how the code works.

I have been using microcontrollers for a long time now.  I started in college as part of the program and have never stopped.  Professionally, educationally, hobby, I’ve done projects of all types.

Recently I decided to try something with a Raspberry Pi.  It is the next step up, basically being a little computer.  This was so I could play with Linux again (it’s been years) and do something with a web browser.  These are things I don’t have experience with and have been interested in learning for some time.

The project I settled on was a monitor for the furnace in my apartment.  This monitor will measure temperature(s) and sense if the furnace is running, then log this data.  There will be a web interface that will draw graphs of the data on a daily basis.  There will also be an LCD screen on the pi so that I can see the current data without needing a web browser.

The first step was to make sure I could sense whether the furnace was running.  My furnace is controlled by a thermostat.  A thermostat is a temperature controlled mechanical switch.  Mine looks like this (The wire hanging down was added later): 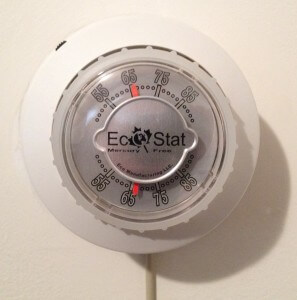 I needed to open this up to see how it worked.  So, I pulled off the ring on the front and exposed 3 screws holding it to the wall.  I took out the screws and pulled the switch off the wall.  I was left with a mounting plate that included a set of screw terminals with a 2 conductor wire attached.  This is the wire running to the furnace in the basement that controls the furnace. 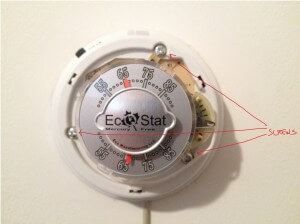 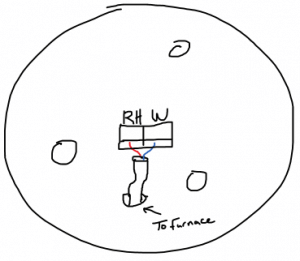 The screw terminals were labeled as RH and W.  I took out my mult-meter and started doing some measuring.

This means that I need to monitor the voltage across terminals RH and W.  If voltage is present, the furnace should be off.  The 95mA is mostly unimportant because the thermostat is going to stay in place.  I just need to make sure the pi doesn’t draw so much current that it turns on the furnace on it’s own.  I drew up the below circuit to accomplish this using a rectifier circuit and an opto-isolator fed into GPIO24. 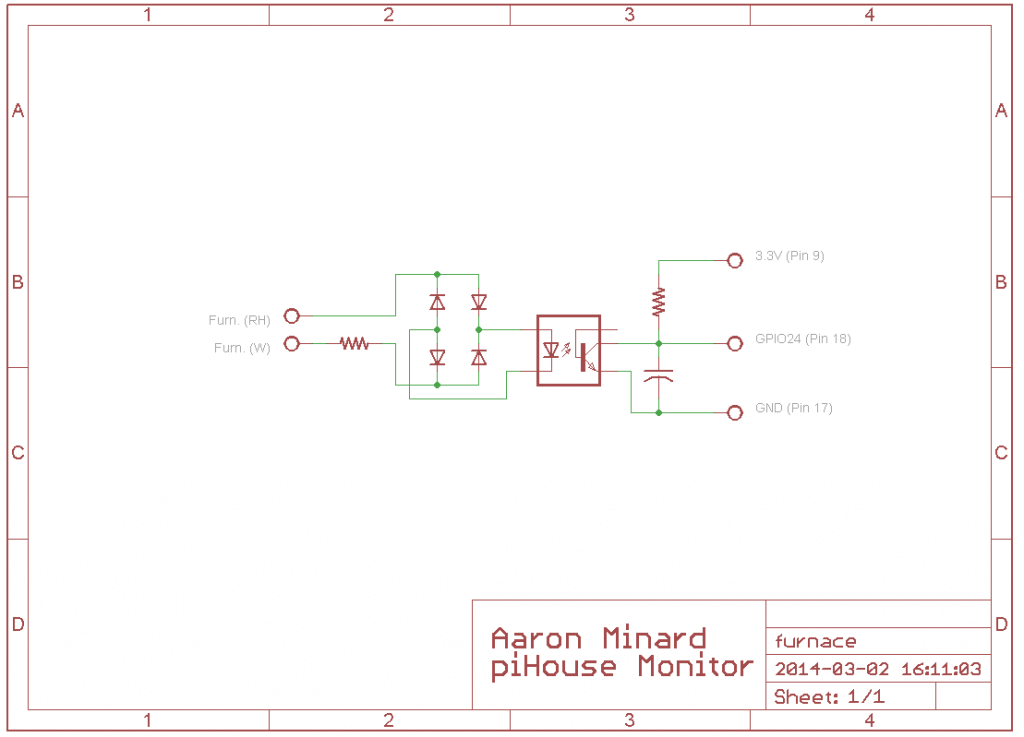 In this circuit, when the thermostat is open, the 10K resistor attached to the terminals limits the current feeding the 4 diodes, which function as a bridge-rectifier.  This rectified AC then drives the LED of the opto-isolator.  When the LED is lit, is turns on the transistor, shorting GPIO24 to GND with a 1uF cap for smoothing because its an AC signal.  When the thermostat is closed, there is no current driving the opto-isolator and GPIO24 is pulled up to to 3.3V by a 100K resistor.

With the furnace monitoring designed, I had to decide on a temperature sensor.  Unfortunately, the raspberry pi doesn’t have any built-in analog inputs.  This was a little disappointing because it’s a standard feature on most microcontrollers I have used, however this is a computer.  After a little research, I settled on a sensor that uses the Dallas 1-wire protocol.  This is a serial bus that is similar to I2C.  I liked it becuase there is pi support and since it is a bus, it is expandable (multiple sensors) without using more inputs.  I found some DS18B20 1-wire Temperature Sensor ICs in a probe package with wire attached on Amazon, a bought a few.

Following the datasheet recommendations, I wired up the temp sensor like this: 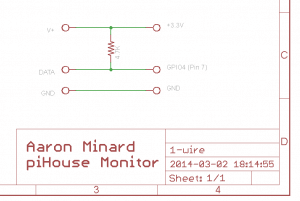 The last piece for this was an LCD screen.  I did some research and picked a product from Adafruit that has a 16X2 RGB LCD Screen and 5 buttons on a “shield” style board that plugs into the GPIO header on the pi.  I ordered one and when it came in, I soldered it together.

After much programming (That will be a future post), I had all the parts working.  So it was time to put the unit together.  I plugged the LCD screen into the pi, then soldered some wires to the backside of the header-pins on the LCD shield.  The other ends of the wires go to some proto-board where I built the schematics pictured above.  I then added a 2-conductor wire in parallel to the thermostat and connected the other end to the pi’s “furnace” input.  I wired up the Temperature sensor.  I mounted it all to a bookshelf and fired it up. 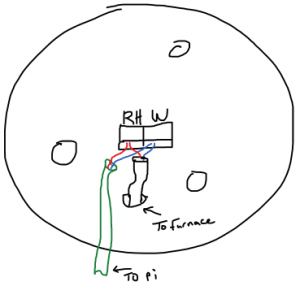 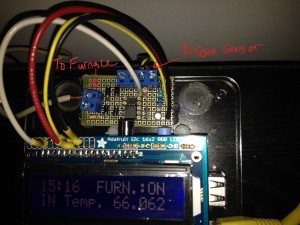 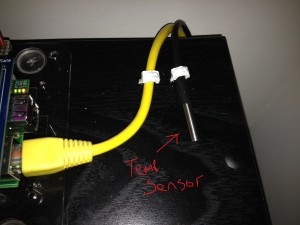 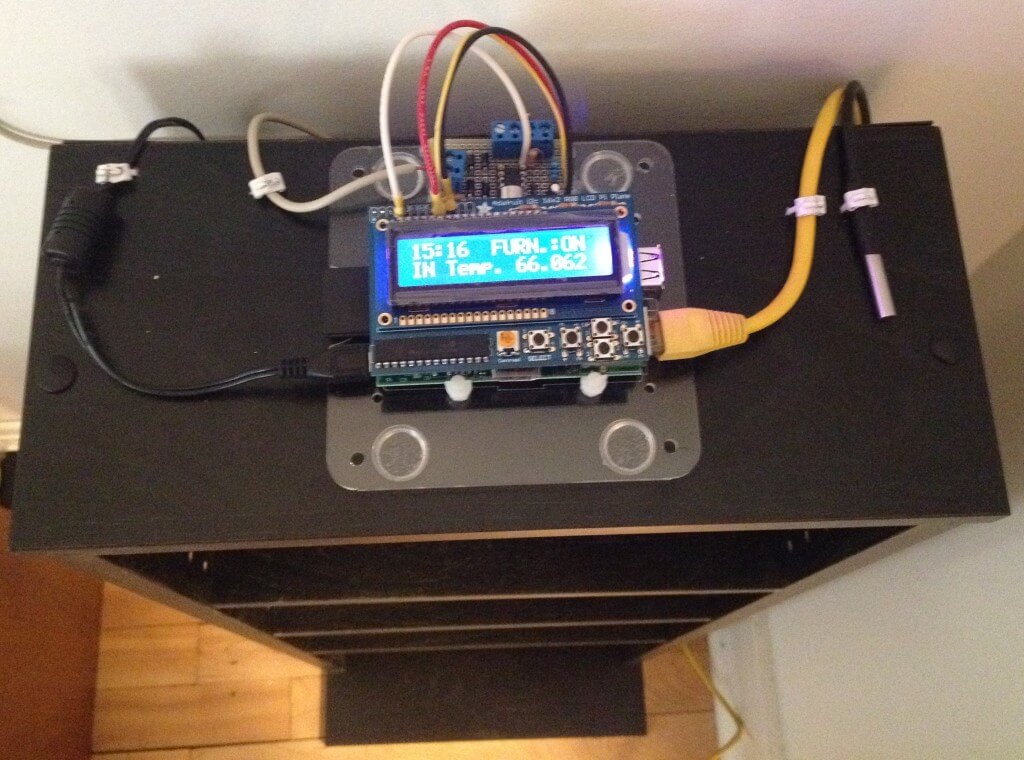 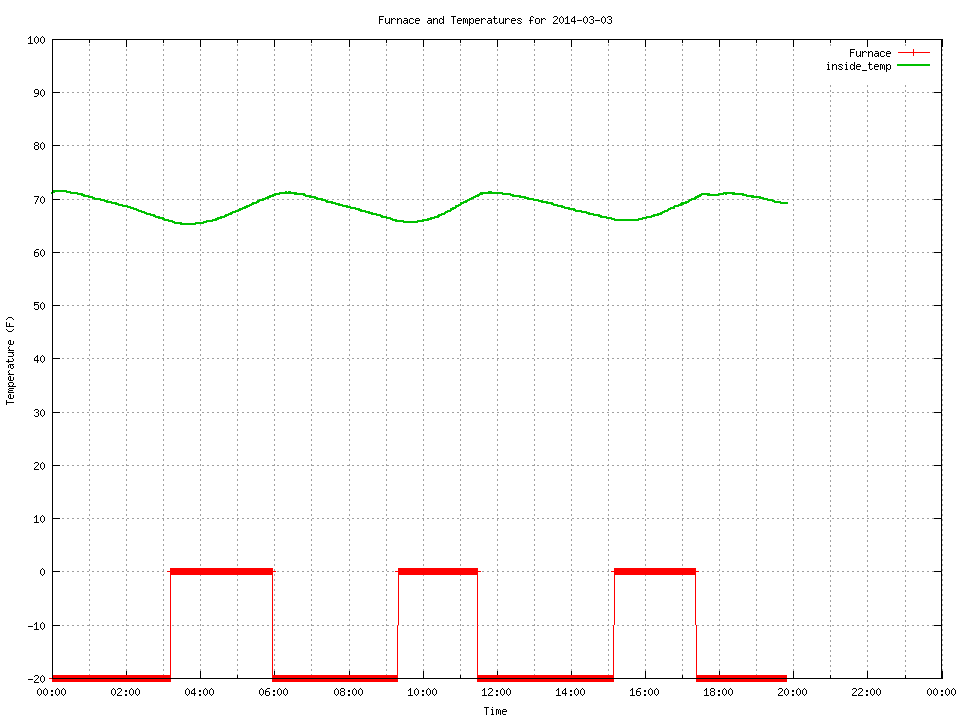